CANCELED DUE TO PANDEMIC! A Prayer for the Love of Humanity…Good Friday @Lockheed Martin. Good Friday 2019 Action & Pictures Herein… CANCELED DUE TO PANDEMIC!

Call the Brandywine Peace Community, (484) 574-1148, if you are interested in participating in the nonviolent resistance/civil disobedience and willing to face arrest. On-site meeting at 11a.m. for those thinking civil disobedience.

Good Friday, April 10, in the Year of Trump 2020 is the first year since  1977 that the Brandywine Peace Community cancelled its Good Friday observance, due to the Caronavirus Pandemic

This is how it went last year, and years past. The pictures below illustrated the story.

What follows is the Prayer for Humanity at Lockheed Martin 2019

(Dedicated all the people who have made these 40 years of protest and nonviolent resistance a reality.)

LET US SEE WHAT LOVE CAN DO (William Penn, Quaker founder of Pennsylvania, October 18, 1681, A Letter to the Lenape Indian Nation)
It was noon on Good Friday 2019, in this Season of Passover at the Brandywine Peace Community sponsored observance, a Prayer for the Love of Humanity at Lockheed Martin in King of Prussia, Pennsylvania.
All participants adhere to our nonviolence discipline: observing the spirit and discipline of nonviolence “refraining (in the words of Dr. Martin Luther King, Jr.), from the violence of fist, tongue, and heart”.
We had a litany for the Love of Humanity (see below). Fr. Patrick Sieber read Luke 23: 33-49, which was followed by a bell tolling and a superb piece of songwriting in which Tom Mullian conveys the time in which we live and the message to which we cling: For The Love of Humanity (see lyrics below).
As the bell tolled, a small group of people walked slowly into the Lockheed Martin driveway main entrance, stretching across the blocked entrance with crosses reading: “For The Love of Humanity” and signs reading “We Support the U.N. Treaty to Abolish Nuclear Weapons” (see www.nuclearban.us ).
In twos and threes, people eventually turned and began walking toward the Lockheed Martin lobby, intending to deliver the U.N. Treaty. Stopped by company security, six people were arrested by Upper Merion police, handcuffed, and taken to the Upper Merion Township building/police station from where they were cited for disorderly conduct and released.
The six arrested at Lockheed Martin, King of Prussia, Pennsylvania were: Theresa Camerota and Tom Mullian, Wyncote, PA; Paul Sheldon, Media, PA; Fr. Patrick Sieber and Robert M. Smith, Philadelphia, PA, and MJ Gentile, Yellow Springs, Ohio.
The Brandywine Peace Community was formed in 1978 with a commitment to nonviolent action, peacemaking, and war resistance. Lockheed Martin is the World’s largest war profiteer, U.S.’s #1 weapons corporation: from drone warfare technology to nuclear weapons and preparations.
The Good Friday observance occurs annually as part of Brandywine’s ongoing campaign of nonviolent direct action at Lockheed Martin.
For more information, contact the Brandywine Peace Community at brandywine@juno.com.

A Prayer for the Love of Humanity

I spent the good part of this Holy Day, handcuffed in a police van, singing my favorite hymn “Where you there when they crucified my Lord”…. Given the tenor of the times, it seemed like the right place to be! Along with five others, I was arrested, charged with disorderly conduct and released, pending a court appearance.

About 40 folks, including members of my own family (niece and grandniece), humbly prayed the “Stations of Justice, Nonviolence and Love” in the shadow of the world’s #1 war profiteer, from drone war technology to nuclear weapons and war preparations.

Still two minutes to “nuclear midnight” on the doomsday clock…

Abolish Nuclear Weapons, Support the U.N. Treaty for the Abolition of Nuclear Weapons. This is the first public witness of support for the treaty at #1 nuclear weapons contractor Lockheed Martin, and in the Philadelphia area.

For over 40 years, we’d stood before the world’s #1 war profiteer, with crosses covered in bomb figures and would read the stations of the cross followed by readings on wars and violence around the world, and the supreme horror of nuclear weapons. We’d speak about poverty and the denial of the poor. We’d speak of the desecration of the earth, and the suicidal denial of climate change in high places.

This year, however, with what we face at Lockheed Martin, in this “Trumpian” time of hate and the walls of hate, in this time of war and violence against the “OTHER”, in this time of a new nuclear weapons build-up without moral debate or barely public mention, we seek to end the silence by declaring peace.

We declared the most revolutionary of “stations”: love. We held up crosses not covered with bombs, but with the words: For The Love of Humanity.

Who are we now?

The children are in cages by the borderline
Just like the middle ages, cruel and unkind
Torn from the arms of their mother’s care
The mind explodes, their hearts they tear
Seeking shelter from the violent hands
Fleeing death, central American lands
The jail door slams, echoes rebound
The young ones cry, can you hear the sound?
Chorus:
When the light shines down on a dark despair
Our faces in the mirror give an ugly glare
For the love of humanity, can we ask somehow?
What are we becoming, who are we now?
When the smokestack lords and the railroad kings
Princes of pollution, makers of dead things
Release their venom into the earth and sky
Streams run black, fish and fowl die
When the big heat comes and never leaves
Melting the mountains, the whole world grieves
When the oceans rise over lowland homes
Good people going under to a fate long known
Chorus
The broadside of space, the great mystery
They mount the guns with great revelry
What will they fight? The silence and the cold?
Will they build more crosses with the souls that they sold?
Of bombs and battles, what use are these?
Big oils death rattle, they gasp and heave
There’s just one struggle, that to survive
For the love of us all, let no one die
Chorus
(Words & music by tom mullian, Copyright 2019)
Good Friday Stations for the Love of Humanity
Reader: 1st Station: Pilate Condemns Jesus to Death.   All: For the Love of Humanity.
Reader: We remember Jesus, born homeless, who died the tortured death of a political prisoner by the all-powerful ruling hand of empire.                All: For the Love of Humanity!
Reader: 2nd Station: Jesus Carries His Cross.   All: For the Love of Humanity.
Reader: We remember our own history of empire that began with the lie of discovery and the whole scale slaughter of Indian peoples, the original Americans, and the enslavement of people, especially people of color, around the world.  All: For the Love of Humanity!

Paul Sheldon, Media, PA
Reader: 8th Station: Jesus consoles the women of Jerusalem.     All: For the Love of Humanity.
Reader: How much longer.  U.S. wars dot the earth, in the Middle East, Africa, Asia.  Vietnam, remember that generation’s war, a war between generations.  Vietnam, ‘destroying the village in order to save it’, strategic hamlets, search-and-destroy missiles, napalm, electronic battlefields, Dr. King says at Riverside Church that the bombs that fall on Vietnam have their fallout on America’s inner cities.  We saw both on the evening news. Something happened.  Marches and demonstrations, civil disobedience young men, draft age, said HELL NO WE WON’T GO, some went to Canada, some went to jail. People burned draft files with napalm, Dan Ellsberg released the Pentagon Papers, and the war began to end. All: For the Love of Humanity!
Reader: 9th Station: Jesus falls the 3rd time.    All: For the Love of Humanity.
Reader: Christmas, 1979, born of the anti-war resistance of the 60’s, the Brandywine Peace Community began anti-nuclear weapons protests at General Electric plants in Phila and King of Protest, people were arrested and went to jail.  Sept. 9, 1980, the Plowshares 8 entered a G.E. plant in King of Prussia manufacturing Mark 12A nuclear warhead casings for Minuteman III missiles and did the first act nonviolent disarmament. Thank you Dan Berrigan (deceased), Phil Berrigan (deceased), Dean Hammer, John Schuchardt, Molly Rush, Elmer Maas (deceased), Sr. Anne Montgomery (deceased), and Carl Kabat. The Plowshares 8, presente’. All those with whom we stood on Good Friday here in front of GE, now Lockheed Martin: Bob Simpson, presente’, Mary Jo McArthur, (all) presente’, Annie Geers, (all) presente’, Agnes Bauerlein, (all) presente’ Bill Stuart-Whistler, (all) presente’, others please.   All: For the Love of Humanity!
Reader: 10th Station: Jesus is stripped of his garments.          All: For the Love of Humanity.
Reader: 9/11, if alive you know where we were when terror on that scale came to America. Some of us standing here chose to speak for ‘Justice not Revenge’. What we got was “endless war”, invasions, lies about Iraqi “weapons of mass destruction”, more war to this very day, and something new, drone warfare.  Iraq, Afghanistan, Somalia, Yemen, 40 children killed when a Lockheed Martin missile slams into their school bus, the U.S. backed Saudi war against Yemen has been very good for Lockheed Martin.  Trump is making sure of that. Could we hear from the mothers, please?  All: For the Love of Humanity!
Reader: 11th Station: Jesus is nailed to the Cross.     All: For the Love of Humanity.
‘There are two problems for our species survival: nuclear war and environmental catastrophe. And the two are very much related.’ – Noam Chomsky.  When the Cold War ended, worry about nuclear weapons receded.  Nuclear weapons, however, are still very much with us, and the threat to humanity is greater than ever.  Trump’s policy of nuclear weapons “modernization” is making damn sure of that. Nuclear “modernization” means a lot more nuclear weapons, and newer types of weapons made to be used. The Bulletin of Atomic Scientists’ ‘doomsday clock’ stands at just two minutes from ‘nuclear midnight’. That is why the world is fighting back and we are giving our hearts and minds to saying: Abolish Nuclear Weapons, Support the UN Treaty for the Abolition of Nuclear Weapons worldwide, adopted on July 7, 2017, by a vote of 122 States in favor (with one vote against and one abstention).  All the nuclear weapons armed nations walked out of the Treaty’s negotiations. The treaty becomes legally binding when it is ratified by 50 nations. The world is fighting back against nuclear weapons. Today we have a copy of the treaty for the U.S.’s chief nuclear weapons manufacturer, Lockheed Martin        All: For the Love of Humanity!
Reader: 12th Station: Jesus Dies on the Cross (bell tolling/period of silence) Today we toll a bell for justice, nonviolence, and love.   All: For the Love of Humanity.
Reader We stand against the outrages, crimes, and virtual fascism of Donald Trump and the lethal greed of Lockheed Martin. From the depths of our hearts we decry today’s messages of hate, greed, and violence. As we honored Dr. King on the 51th anniversary of his assassination, just 15 days ago, we remembered his ‘evil triplets of American society: Racism, Greed, and Militarism’, how he considered “justice as love in public” and his message of “unarmed truth and unconditional love.” We continue, as we must, our protest of Lockheed Martin, the world’s #1 war profiteer, U.S.’s #1 nuclear weapons and drone warfare contractor. All: For the Love of humanity! 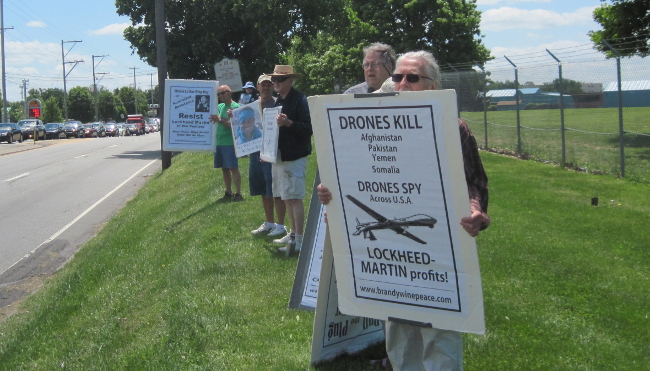 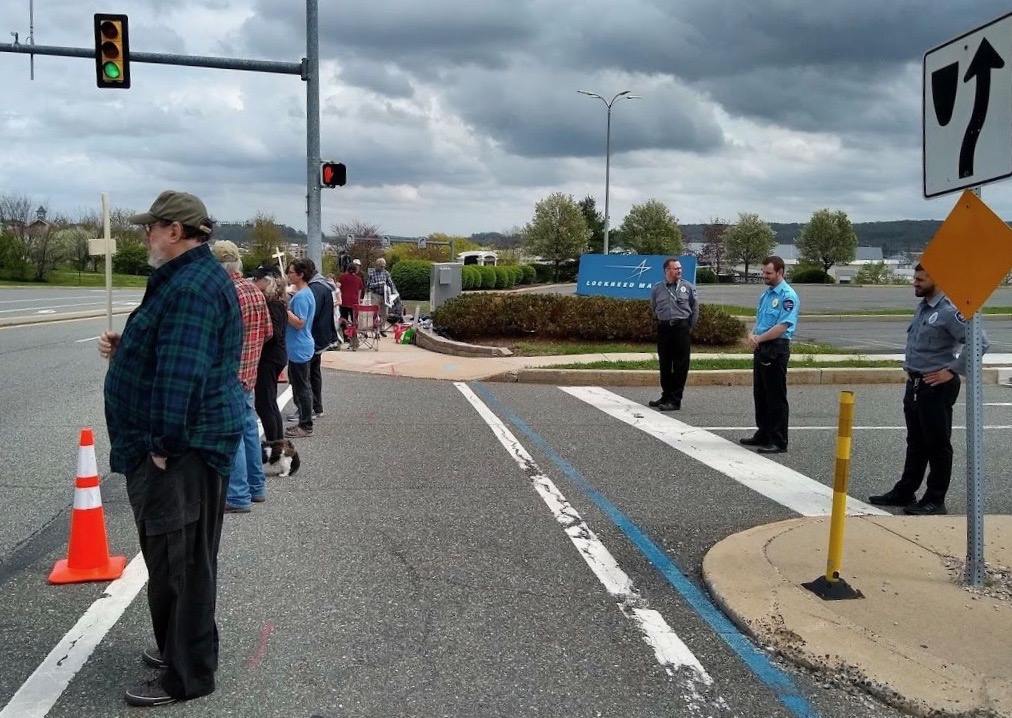 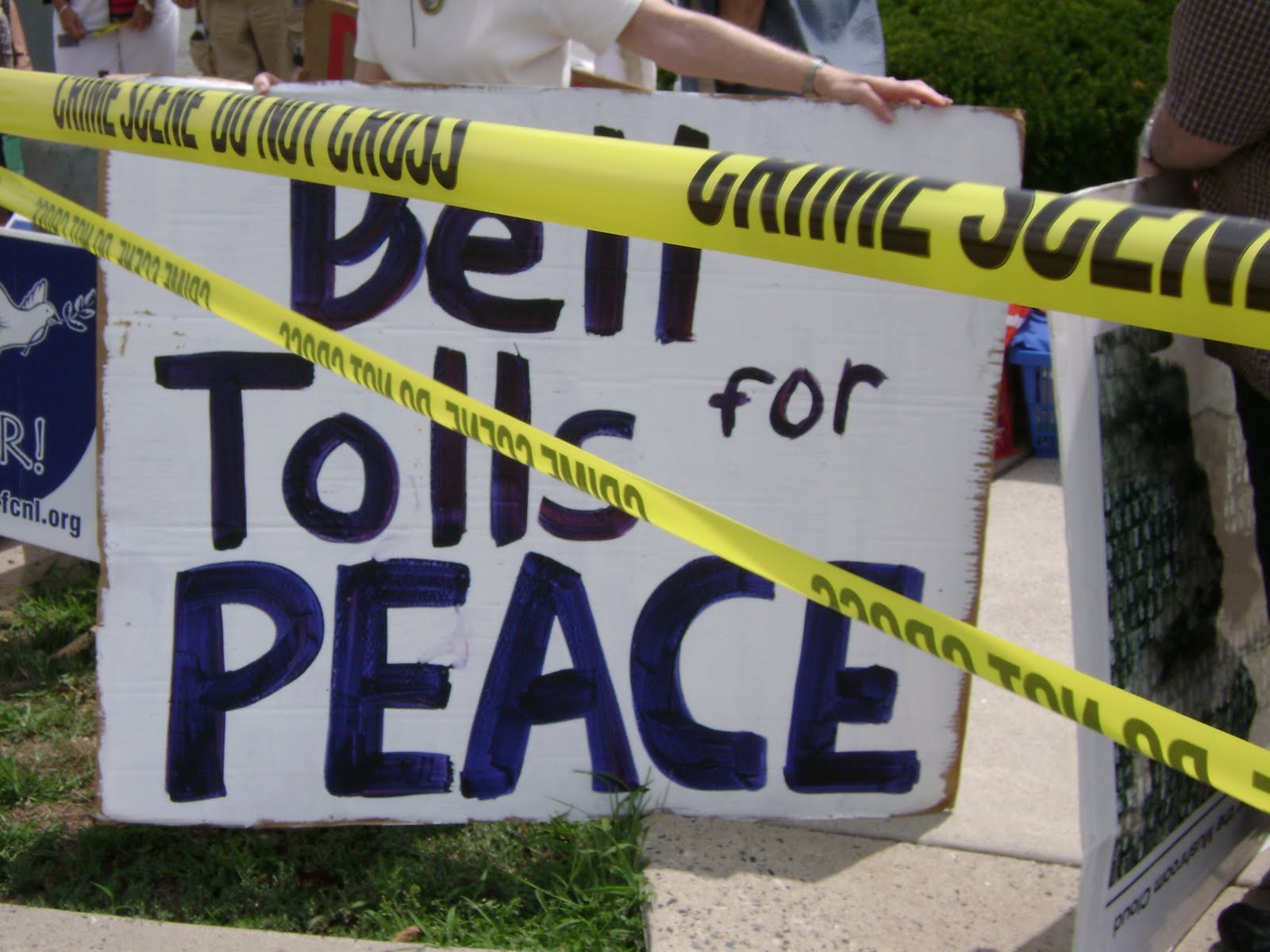 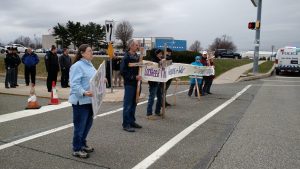