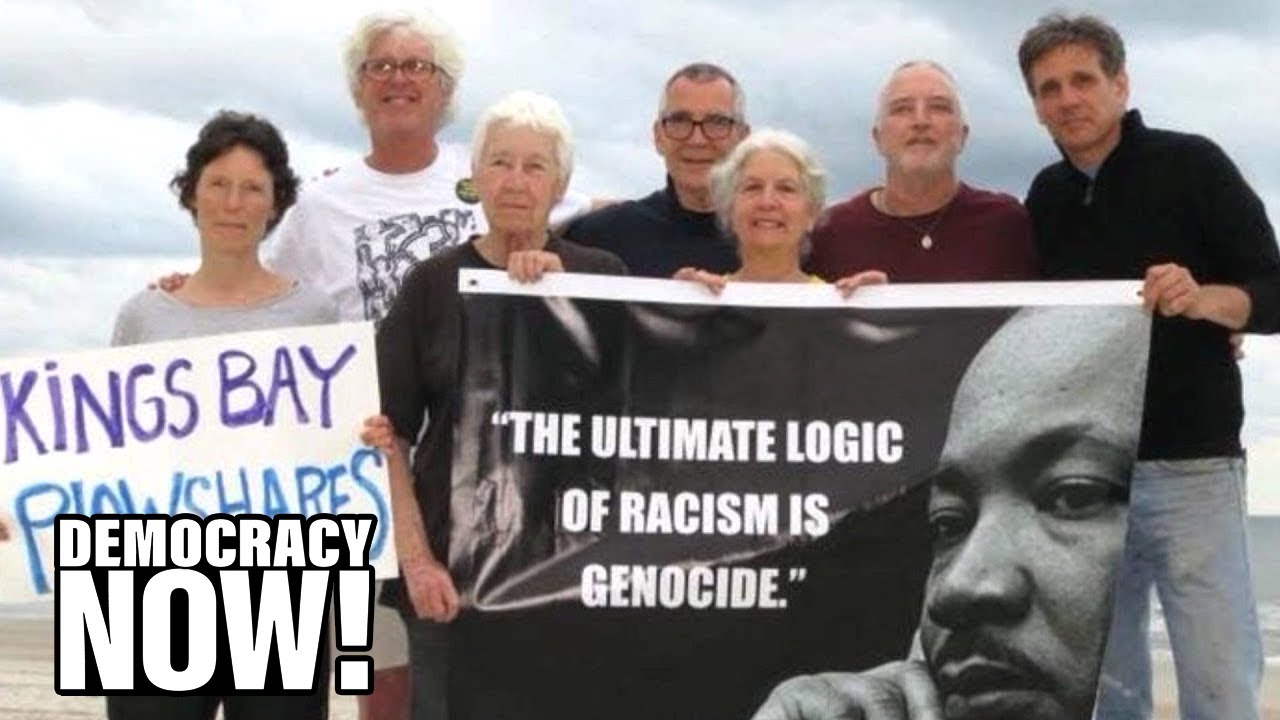 And They Shall Beat Their Swords into Plowshares…Join the International Support for the Kings Bay Plowshares 7.   Visit: www.kingsbayplowshares7.org

Say a prayer for our brave Plowshares friends.
Stand up for peace and a future free of nuclear weapons.
Support the UN Nuclear Ban Treaty!

October 21 is the opening day of the federal trial in New Brunswick, Georgia for the Plowshares act of nonviolent resistance at the Kings Bay Trident nuclear submarine base on April 4, 2018, the 50th anniversary of the assassination of Dr. Martin Luther King, Jr. The King Bay Plowshares 7 face 25 years in prison for their act of religious resistance in honor of Dr. King, on behalf of humanity facing the continued threat of nuclear war. Some of the 7 have been in jail more than a year awaiting trial.

Throughout the religious vigil in front of the Phila. Federal Courthouse building there will be a tableau with two banners hanging from frames. The banners read: “And They Shall Beat Their Swords into Plowshares…” and “ABOLISH NUCLEAR WEAPONS” Between the two banners there will be an actual nuclear warhead casing, removed in 1982 from behind a GE plant (now Lockheed Martin) in King of Prussia, PA., with a large sign reading NUCLEAR WARHEAD CASING, It carries an H-Bomb = 30 Hiroshimas. The vigil will conclude with a short service with readings and bell-tolling.

More information from Brandywine Peace Community at www.brandywinepeace.com or by calling 484-574-1148

Seven Catholics, calling themselves the Kings Bay Plowshares, are seen April 4, 2018, before they entered the Naval Submarine Base Kings Bay in Georgia to protest nuclear weapons. They argued in U.S. District Court for the Southern District of Georgia Aug. 7, 2019, that their actions were motivated by their Catholic faith and not by their political beliefs and therefore were protected by the Religious Freedom Restoration Act. The group: Clare Grady, Patrick O’Neill, Elizabeth McAlister, Jesuit Father Steve Kelly, Martha Hennessy, Mark Colville and Carmen Trotta.